What I really wanted to tell you about is the upcoming National Banana Pudding Festival, held the first week of October in Centerville, TN.

Sometimes, planning and preparing for an event is as much fun as the event itself. When I see YouTube videos of amazing father/daughter wedding dance routines, I smile not only at the cleverness of the routine, but also at the thought that this dad must’ve spent hours with his cherished daughter, practicing and perfecting his steps. (You really must check out this one – it’s very amusing!)

But I digress! What I really wanted to tell you about is the upcoming National Banana Pudding Festival, held the first week of October in Centerville, TN. And how I’m already having fun with it.

So it happened that, last Saturday, after returning from a fun (but hot!) day at the Americana Barbecue Festival in Franklin, TN – I spent my evening whipping up not one, not two, but THREE batches of banana pudding. Which recipe would show true originality AND a delicious combination of flavors?

The big showdown was Sunday, and it was a great excuse for an end-of-summer family get-together. As we finished our lunch, we marked paper plates so that our taste-testers would know whose banana pudding they were trying. Each person tried five different puddings! And we all agreed that all the puddings were as delicious as they were different.

In the end, top honors went to one of my sisters-in-law – thanks in part to lobbying by my nephew, the future campaign director! But I got great feedback on my recipes, and have decided that I’ll be sending in Recipe #2 (shown below) to try to gain entry to the upcoming contest. I just couldn’t resist, after recently visiting Elvis Presley’s birthplace in Tupelo, MS, for inspiration! So, here’s hoping that they think the following recipe is promising enough to get me to come to Centerville to cook for the finals! 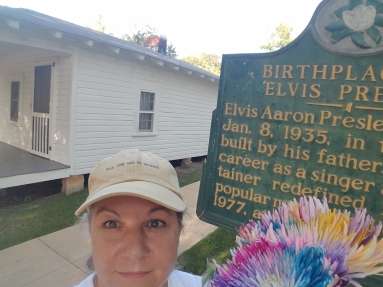 Cook the pudding mix with the milk according to package directions. When pudding has thickened, remove from heat, cover, and set aside.

Peel bananas and put into a large bowl; add honey. Using a potato masher, mash bananas and honey together until slightly lumpy. Set aside.

Chop peanuts and bacon; set aside.

Using a hand mixer, whip the cream until frothy; add sugar and continue to whip until firm. Spread the whipped cream as the top layer of the banana pudding casserole. Sprinkle with chopped peanuts and bacon to garnish.

When your guests tell you how remarkable your banana pudding is, be sure to tell them, “Thank you verry much!”

*I discovered TruBee barrel aged honey, a product of Arrington, TN, at the barbecue festival. Its distinctive flavor was just the thing to bring a true Tennessee flair to my banana pudding.

Sounds Like Fun - Nashville is a labor of love - my love for Music City, Middle Tennessee, and experiencing the best that our area has to offer. In recent years, I've developed an informal following among my friends and professional colleagues. People ask me what I've got planned for an upcoming weekend – or seek advice about good activities for showing visiting friends or relatives around the Nashville/Middle Tennessee area. Even though there are other sites with event calendars, I think followers of my blog can expect some extra insight into goings-on that would suit ‘most anyone seeking to experience the diversity of fun and interesting things to do around town. I'm always on the look-out for good places to walk my dog. Maggie is a 10-year-old mixed breed shelter dog who still becomes comically ecstatic when she sees me pick up a leash. She's my inspiration to start a page featuring great dog walks around Nashville. View all posts by Margaret